On Monday, October 3rd the Canadian Federal Government released new mortgage and housing rules. These new rules have come as a shock not only to many prospective buyers, but also to many lenders. So, what are these new rules that everyone is talking about and how do they affect the average Canadian, borrowers, lenders and foreign buyers?

Canadians looking to purchase a home with less than a 20 percent down payment need to qualify at a higher rate (The Bank of Canada’s five-year fixed posted rate) than what the lender is offering (typically a much lower rate). This is in an effort to protect consumers if rates increase, as well as curb rising consumer debt among Canadians, which is at an all time high.

*these rules also apply to refinances.

The group who has most to lose from this new rule are obviously first time home buyers, who will see their buying power shrink by as much as 30 per cent. 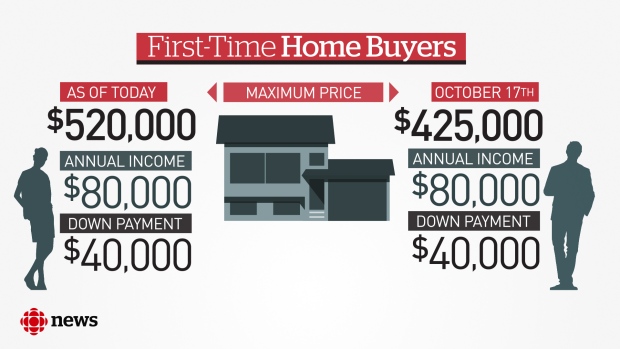 Under these new rules, home buyers have to lower their expectations for what they can purchase, or keep renting until they can save for a larger down payment.

“We have two big heated markets but that’s not the story of the rest of the country” said Sarah Albert, President and Principal Broker at PropertyGuys.com Mortgage. “An unintended consequence [of the new regulation] is that it has changed the buying power for average Canadians in all communities instead of affecting only those hot markets”, she added.

A slower Alberta market comes to mind as a region that could be hardest hit by these new rules, where many people would be looking to move, and/or downsize. These new rules could limit the pool of buyers by a third.

Another group who could be hardest hit by this rule are those who have new builds and mortgages already approved, if their closing date isn’t until after the new rule deadline. They may no longer qualify for the rate at which they had previously been approved , effectively throwing a wrench into their plans to build or move into the property they wanted.

The Canadian government will now ask that banks share some of the risks on insured mortgages. This is so that in the case of a housing crash, the government does not take the full brunt of that loss.

This scenario could lead to added costs for banks which could be passed down to home buyers in the form of higher interest rates. However, it would reduce the risk for Canadian taxpayers if things went steeply south in the housing market.

This new rule had been long awaited by many of those in Vancouver and Toronto calling for help with their red hot housing markets. Speculation has pointed to foreign buyers fueling the fire by flipping houses with the help of a loophole, allowing them to avoid capital gains taxes.

Now, foreign buyers with the intention of flipping houses will have to prove that the house is their primary residence in order to avoid the capital gains tax. This in theory would limit the amount of foreign buyers coming into the market for investment purposes.

The government will now be placing greater restrictions on when it provides portfolio insurance for so called “bulk insurance”. This is in an attempt to help limit the government’s exposure on mortgages for houses over $1 million and the stress on default insurance companies.

While this on the surface might mean nothing to most Canadians, there are huge implications for non-bank mortgage lenders whose ability to sell mortgage-backed securities are now in jeopardy, which are a big supplier of funding for them. As we’ll see, this change does indeed trickle down and affect average Canadians.

“From rentals, extended amortizations and refinancing; monoline lenders aren’t sure if they would be able to offer these products,” said Albert. “These changes are great for the big six banks who are balance sheet lenders,  but absolutely horrible for non-bank lenders that use securitization to fund mortgages. The playing field is no longer level” she added.

These changes work to limit competition in the mortgage market for many types of loans. Less competition means higher interest rates and less approvals which are ultimately bad for consumers.

Limited competition in major industries such as telecom have shown to be disastrous for Canadian consumers as we have some of the highest phone and internet rates in the developed world.

“I feel as if we’re going in that direction with these new rules,” explained Albert. In addition to ramifications for consumers and monoline lenders, mortgage brokers also expect to feel the pain of these new rules, Albert adds, “if 50% of my lenders disappear, what does that do for my business?”

Although many of these new rules are well-intentioned, (i.e. to protect consumers from debt and increased rates, reduce government and taxpayer risk, cool hot markets, and close loopholes) the unintended consequences of these rules could hurt some more than they help the average Canadian.

However, the Canadian mortgage and housing industry is strong and very adaptable to change. With a little help, it would be no surprise to see both consumers and those in the monoline mortgage industry adapt quickly to ride the wave.

Chris is an editor and writer for Welcome Mat. He is based out of Moncton, New Brunswick, Canada.